I’m going to keep this short and sweet: Chipotle is going to get crushed next week.

This earnings season has been feast or famine, particularly for growth names (see: massive bear gains from $NFLX and $FB). Chipotle, with prior-year earnings growth of 200% and a PE of 57 vs. the average food industry PE of 22, fits that bill.

Why is Chipotle about to get railed?

With 19 BUYS and 0 SELLS, Analysts are mostly bullish on Chipotle. They’ve likely priced in the fact that inflation has raw costs through the roof, including many of its core components like steak, rice, beans and chicken. If the CEO comes out and says, “We had to spend a lot more than we usually do on chicken”, that isn’t going to be a curveball.

We need to focus on what the street is expecting, versus what they’re going to get.

With high comparisons and higher expectations, the street expects a lot out of Chipotle. For the same reason that $SNAP and $AMZN just ran in the face of preceding bearishness, Chipotle is about to deliver a particularly surprising downside surprise.

For a peak at the bull case, check out this bullish Forbes article from today, 2/04:

“We expect Chipotle to beat the consensus estimates for revenues and earnings. The company has reported better than expected revenues and earnings figures in three of the last four quarters. The company did better than its peers during the pandemic as it had been investing in digital technology for a couple of years before, so the transition was seamless. We expect the growth to be led by Digital Sales in the fourth-quarter FY2021 results.”

That last sentence is especially important.

Here’s another article which essentially says the same thing:

Notice a pattern here? We’re relying on digital sales. Here’s the issue: Many Chipotle restaurants have been removing mobile ordering all together due to staffing shortages. Those that haven’t have seen mass inability to meet order-promise times and higher-than-average refund occurrences in the month of January.

Notice that last bolded point. Staffing shortages. Chipotle is paying more for fewer employees. It still isn’t enough to keep staff in the door, meaning they will likely have to continue increasing the pay and sweetening the deal. tl;dr: you can expect lowered forward guidance (the biggest bane of all growth stock earnings reports).

This is more important than having burned out employees doing twice the amount of work. This is about the fact that Chipotle’s are closing down. Starbucks and McDonalds have closed fewer locations and kept more hours than Chipotle, but both failed to beat earnings this quarter. Expect a worse version of this, set against a high stock price, in Chipotle’s next week earnings call.

Anecdotally, two of the three Chipotle locations within a 50 mile radius of me have been closed for the past month. The one that isn’t has limited its hours from 11AM to 2PM – completely missing the highest revenue hour of the day which falls between 5:30 and 6:30. Not great.

How Am I Playing It

I can’t sugarcoat it. The Chipotle options chain sucks. If you haven’t seen it, think:

That means that as much as I’d like to stack a bunch of debit spreads, I can’t. The fills are just impossible, there’s too much slippage. So instead, if you’re inclined to take a bearish view on Chipotle, we have to target flat, round, numbers like 1300, 1400, and 1500. When we do this, we’re hoping for the Amazon effect.

That is, prior to it’s Thursday earnings, Amazon saw OTM options explode on both the downside and the upside. The 2500 put, for instance, was up over 2000% for most of the day. IV expands going into earnings already, but a large part of this has to do with the fact that Amazon is an expensive stock with a massive amount of options available, which aren’t very liquid either. So when something draws people to the stock in large numbers (like an earnings event) the IV can do some really incredible things. If that happens, we may look to take a pre-earnings gain.

Otherwise, we have a strong thesis to potentially give us some Netflix/Meta level bear-gains.

This article was written by u/LostToAModIn7Moves. 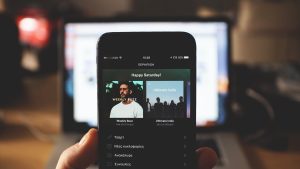 Spotify (SPOT) stock could be undervalued